Lucia Iannotta grew up among the olive groves. After graduating from university, she decided to take the reins of the family business and create something entirely new.

On our tour of the Iannotta estate in the hills above Sonnino we were immediately struck by the rustic feel of the hillside grove. All the Itrana olive trees in these hills are grown with organic practices, and despite a few ruins - an ancient pathway for water called 'sassora;' an old hand-built road used by mules to carry the olives down the hill - the grove looks just as one might expect it did 200 years ago. The Iannotta family founded the company in 1952, beginning with Lucia Iannotta's grandfather. The company was passed down over the generations until Lucia took over in 2008 after completing her Economics degree. Lucia points out that although there were no male heirs in the family at the time, she has managed not only to keep the company afloat, but also made the Iannotta name even more well known. "Not bad for being 'just a girl,'" Lucia says. Sonnino is located halfway between Rome and Naples in the province of Latina, in the Lazio region of central Italy. Like all of Italy, this is an area with rich history, especially due to its close proximity to Rome. The most famous landmark local to the area is Fossanova Abbey, built by Cistercian Monks between the years 1163 and 1208. The abbey is considered one of the earliest appearances of Early Gothic architecture in Italy. The abbey church overlooks a small cobbled square in Fossanova, a tiny village made famous for hosting St. Thomas Aquinas when he fell ill and died there on March 9, 1274. In the early 1800's the Vatican ordered Sonnino to be razed due to its being the notorious haunt of bandits, most notably a local brigand called Gasbarrone Antonio. Lucia was quick to tell us that the area's residents are still looking for his buried treasure.

Each year the area holds a Goat Festival to celebrate local livestock, however olives are the principle crop of the area. Generations of locals have tended the land with care and patience, and Lucia tells us, "it's in our blood… the terrain is rocky and hilly so we really can’t grow much else!" Through the combined expertise of both the Iannotta family and the local workers the company depends upon, Lucia believes they've created the perfect harmony with their surroundings, as they have learned how to best utilize the natural features to benefit their crops. "I decided to choose a label representing the women of Sonnino, the women of my village, from the early 1900s. They were strong women, who had to live through some difficulties but they surpassed them, for themselves and their families. I see myself in them, and I like this kind of woman: the village woman, the true woman."

Lucia's grandparents and parents were always olive farmers, and producing high quality olive oil has been the goal of each generation. While this story is similar to many of the producers we meet, Lucia is one of the few women in the olive oil industry leading her company. The women from her area had a profound influence on her life, beginning with her mother. "I have a great mother who raised us with her teachings about field work, day after day, about the small trials and the small achievements - how we do all of this together." A recent bottle redesign found Lucia giving tribute to the women both in her family and village.

In her youth Lucia often said, “I'll never do my mother's work.” Yet it was the time spent in her village that led to her success in this challenging business. "The strength of these women allowed me to be here. I've learned from them how to make oil, and they taught me to appreciate the olive groves where I grew up. It was all I knew, to have such a territory, so I didn’t appreciate it. Now I feel lucky to have been born here." These days Lucia thrives on what she once considered her "mother's work." When her oil is finally ready each year, the months of anticipation are finally realized in a final product filled with the scents and flavors of the past year. It is this passion that keeps her going, that fulfills her, that inspires her.

"The team is part farmer, part artisan, and part archaeologist, always full of enthusiasm to inspire emotions through fragrances and flavors." 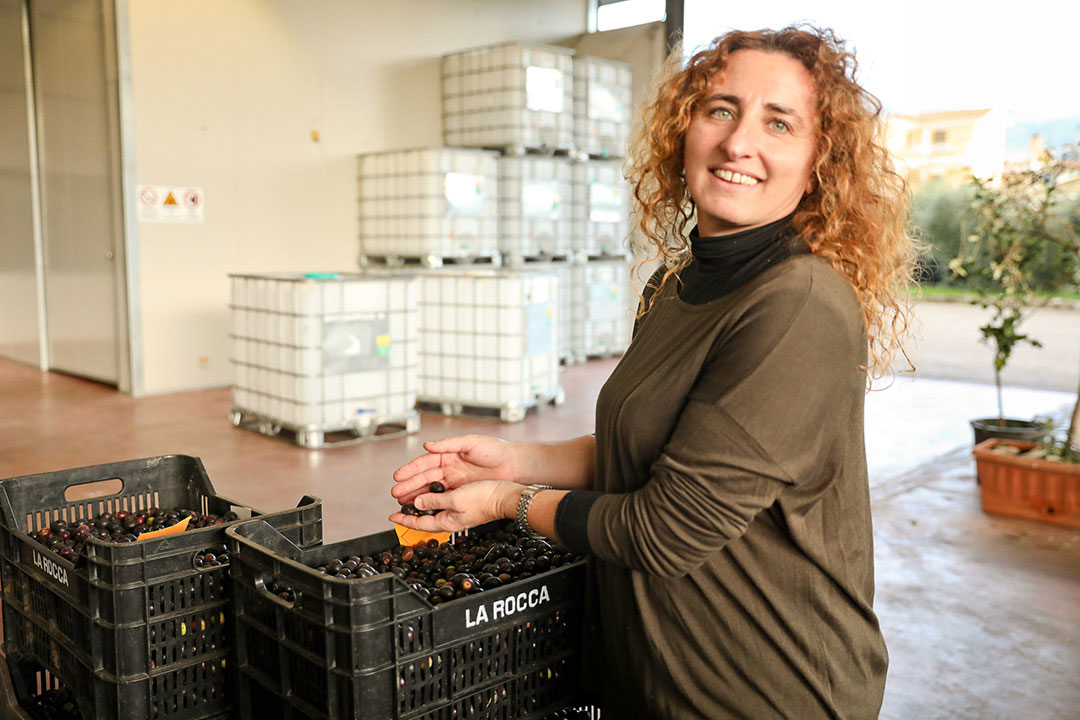 Originally founded by Filippo Iannotta in 1952, Lucia Iannotta took over the company from her parents in 2008. Lucia still works with her mother, Emilia, with the two women serving as master millers of their delightful olive oils. Lucia calls her mother "a great teacher," and these days both are helping educate Lucia's son, Antonio, about the nuances of farming and oil production. But she says going into the family business will be his decision: "I want that he chooses what he prefers to do."

The whole enterprise is under stringent control, from the property’s olive groves, to the olive press, to the bottling line. Lucia even admits that she lives in an apartment above the mill. "I’m with my workers every step of the way - from tending to the trees to expressing the oil." Despite handling so many roles in the company, Lucia finds the most challenging aspect of the business to be securing her customers' trust each year. "Each vote of trust is a conquest," she says. "I want to leave a good legacy behind for my son." 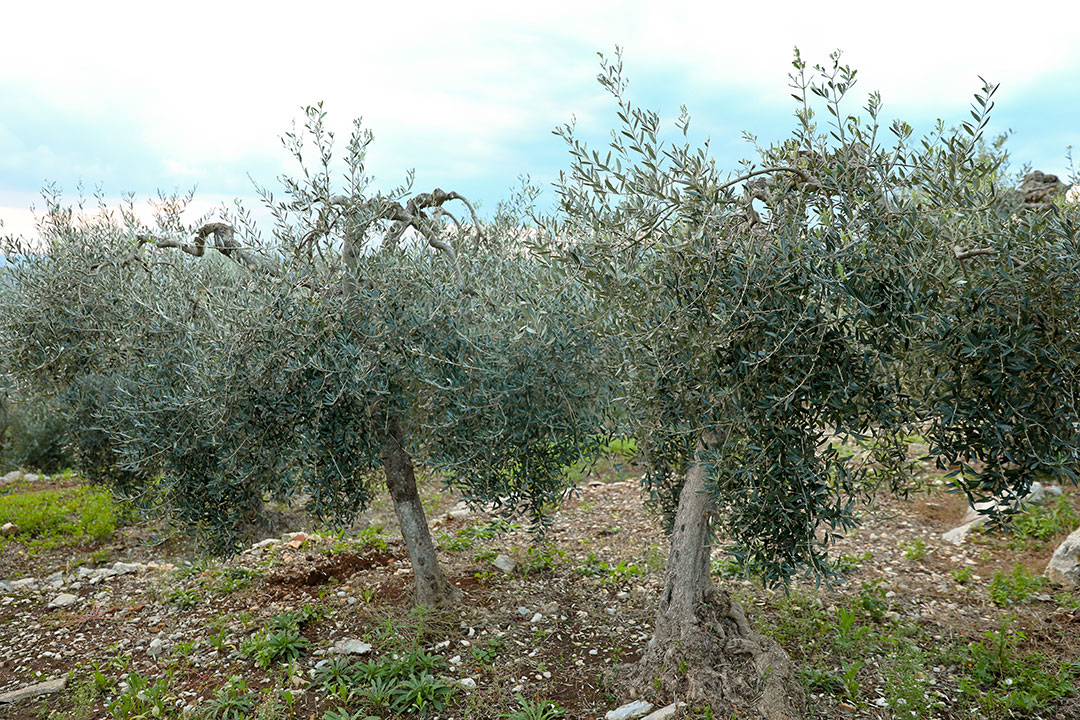 Almost every olive tree managed by the company is of the Itrana variety, a cultivar native to the Latina region and well-suited for the hilly terrain. The Itrana thrive in the rocky limestone hills, with the salt and other minerals found throughout the soil helping impact the flavor of the oils. The Itrana trees can be especially difficult to cultivate, as they don't do well in flat land and dislike climate changes. For pollination purposes the company does grow a handful of Leccino olive trees, a variety that is generally more hardy, but one that does not do as well on stony hillsides.

The company manages close to 6000 trees across 20 hectares averaging about 600 feet above sea level. As many of the trees are cultivated using entirely organic practices, attention to detail is crucial. “We monitor our olive trees constantly, especially when we have to treat them for health issues.” The groves themselves are over 200 years old, but the oldest trees are only about 100 years old. Many of the trees burned down around that time, and then, as Lucia says, they "were born together" to form a crop of older trees. "Thankfully, all of that hard work was already done for me." 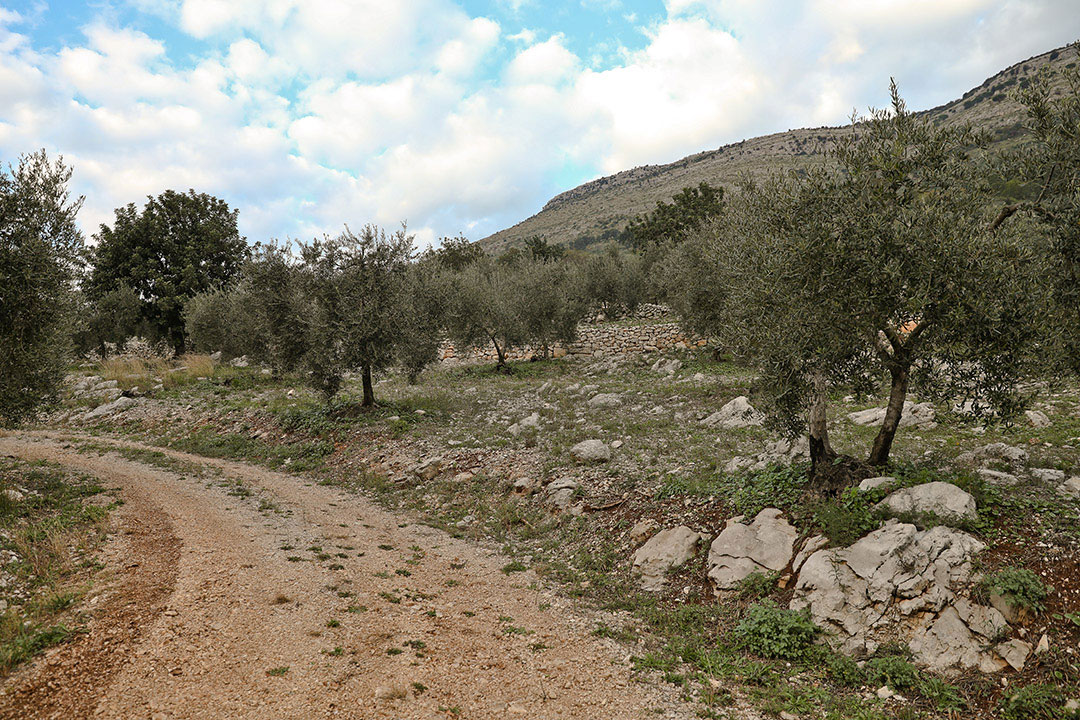 When thinking about the harvest season, one word comes to Lucia's mind: "Excitement! It's the sum of so many wonderful moments." The harvest typically begins around October 1st when the Itrana olives are bright green. “I harvest very early, in September, October. I finish early, when it’s still unripe.” With such a large crop of organically grown trees, the early harvest helps protect the fruit from the olive fly; as Lucia tells us, an unripe green olive "is very hard and the fly can’t penetrate it." The olives are harvested by Lucia along with her team of local workers. Due to the hilly, rocky terrain, they can't use tractors or shakers or straddle harvesters. All the work is done using hand combs or hand-held pneumatic combs. 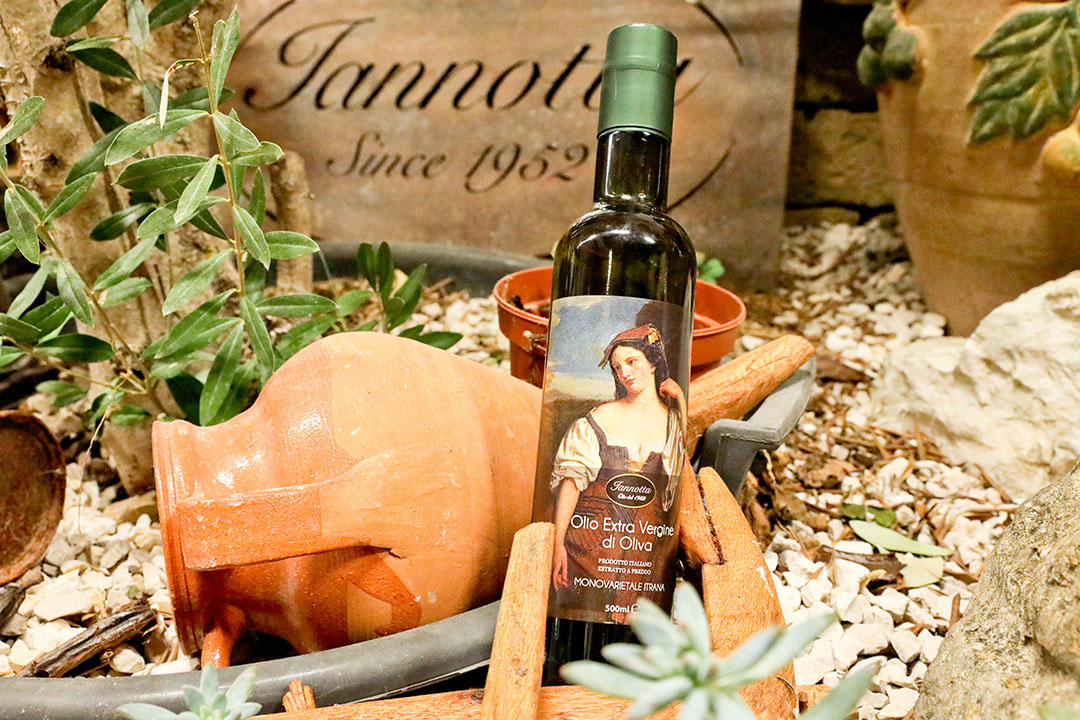 The olives are crushed using a hammermill and the oil is cold extracted with an advanced dual phase centrifuge. Although much of the landscape appears rustic, and many practices remain traditional, the machinery upgrade in 2007 helped realize Lucia's goals to transform the company. Lucia notes that this modern machinery not only improved the efficiency of the production, but also increased the polyphenols of the oils and allowed more complex, nuanced flavors to be discovered. The company typically produces about 50,000 liters of oil per year, but in good years can produce up to 80,000 liters of high quality extra virgin olive oil. 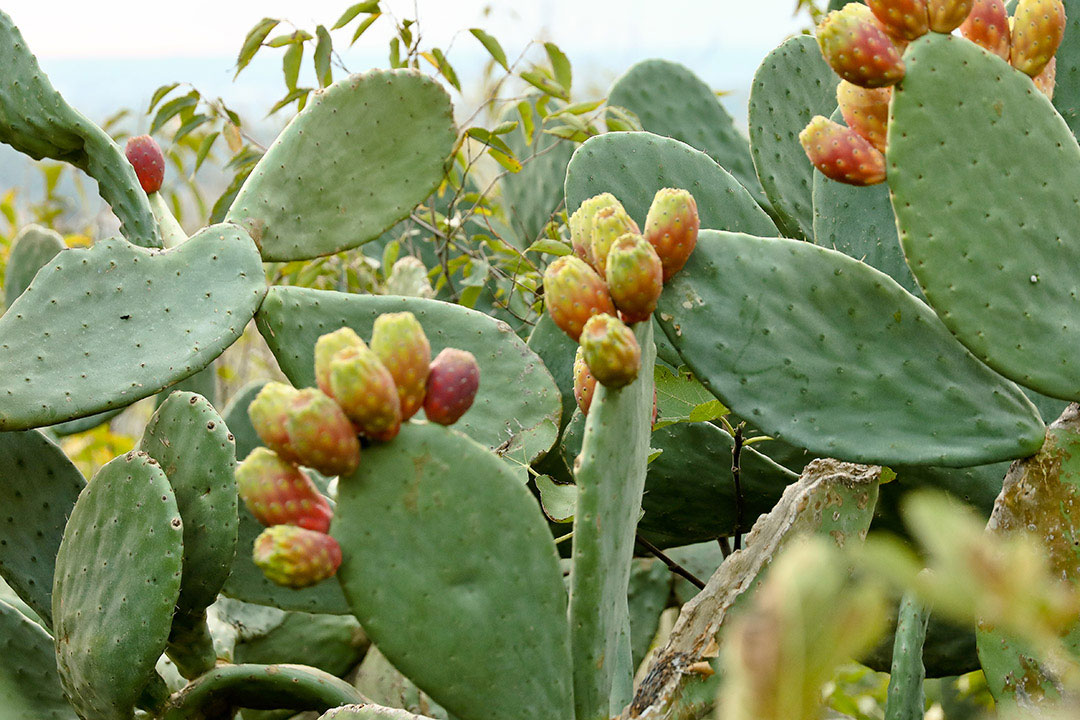 During the fall they collect wild broccoletti and chicory, and in the spring they look for wild artichokes and asparagus. Wild herbs like mint and chives can also be found throughout. Carob, fig and pomegranate trees grow around the edges of the groves, along with a scattering of prickly pear, blackberry brambles and grape vines. Lucia notes how in Italy carob trees usually grow near olive groves, so she honors their historic ties to olive oil by making flour and syrup from them. With the other foods harvested, her company makes jams, pickled vegetables, pasta sauces, flavored olive oils, and vegetable spreads. Every one of these products is 100% organic, and prepared by hand in small batches in the company's own kitchen. They've even started a line of olive oil based skincare products.

The plants determine the rhythm, and I follow them. Therefore, every year is different. 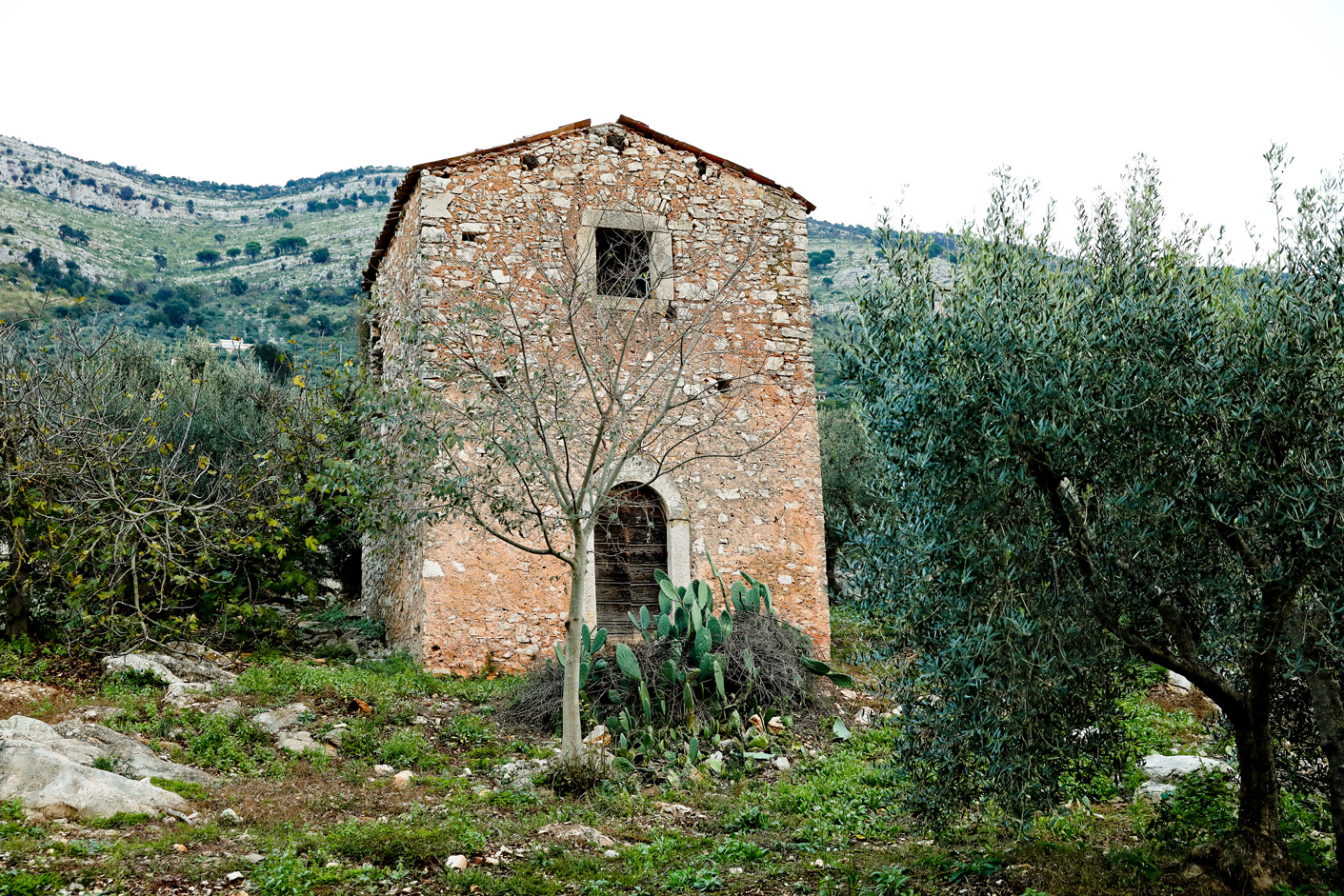 The plants determine the rhythm, and I follow them. Therefore, every year is different.

"The goal is to produce the best Itrana cultivars and to ensure that what ends up inside the bottles and jars captures the region’s true flavors."

Inside the Iannotta mill in Sonnino they have a small shop that sells the complete line of Iannotta products. The product lines include jams, pickled vegetables, pasta sauces, flavored olive oils, vegetable spreads, carob flour, carob syrup, and of course, their signature Iannotta olive oil. Everything is organic, made in the Iannotta kitchen and harvested on the family land.

While there is currently no housing or tours on the estate, there is a 1000 year old church ruin on the Iannotta property that Lucia hopes to one day restore for guests. "It's my dream!" she says.