It should not surprise that a company consistently producing incredibly well-balanced oils is able to balance innovation with consistency.

Twenty years ago the Gálvez-Gónzalez family, creators of the award-winning olive oils of Oro Bailén, were running a brickmaking business. In 1999 when they acquired their two olive grove farms, "La Casa del Agua" and "Los Juncales," it may not have have been clear what their future held. However, they soon identified a niche in the market for super high-quality olive oil. Of course a family of brickmakers understands how to succeed in a new business venture: find materials consistent in both shape and structure, and then build a strong foundation. For master miller José Gálvez that structure began with a solid education in olive oil production, and through his study he learned to develop consistent products year after year. Having previously built his personal foundation by acquiring a business degree, José recognized that this structure must be shaped by guiding principles: at Oro Bailén they do not simply sell a product, they transmit a philosophy to the consumer through a bottle of oil.

With a newfound education in producing high-quality olive oil, José determined not only to bring his new products to the market, but also to subsume the richness and nuances of this ancient juice, this immense part of Mediterranean life, culture, and history, into the core of his knowledge. This determination paved the way for the creation in 2005 of GALGÓN 99, S.L. as a preparer, bottler and marketer of extra virgin olive oils produced exclusively from olives grown on the family’s groves. They chose to brand these products with the name Oro Bailén. According to José, "professionalism is the most important factor in any sector of business, but even more so when a new company is starting out in a field with the history of olive oil." After completing his training, the business venture turned into a life philosophy aimed not only at selling a product, but also at informing and promoting the excellence of the product. Despite olive oil being used since antiquity, many consumers still remain unaware of its tremendous health benefits. A major reason this message fails to reach the consumer is, according to the producer, the high competition within the olive oil sector. This competition has led to misinformation about what makes a quality product, often causing confusion among consumers regarding the differences that exist between extra virgin olive oil types or varieties. As such the oils from global food behemoths and Oro Bailén products do not compete directly; the goal is not to sell a specific number of Oro Bailén bottles, as they can only sell as much product as they are capable of making in a certain year. Instead they focus on educating consumers about the uses of olive oil and how different varieties have different purposes in the kitchen and match different dishes better than others.

Guided by this philosophy and driven by consistency, within a few years after his company's initial formation, José Gálvez and his Oro Bailén Reserva Familiar Picual came in first at the May 2012 Mario Solinas Quality Awards in the intense green fruitiness category. However, that summer and fall the area dealt with extremely hot temperatures, testing all the lessons José had learned to that point. Many processes needed to be changed, and strict guidelines adapted. For example, during harvest that year, "the picking and milling was done very early in the morning with cooling machines in use." But José maintained the quality of his product, with his Picual again among the 2013 Mario Solinas finalists, known in the industry as the most competitive category of the most prestigious competition. Dozens of awards from all over the world soon followed.

Continuing to strive for quality and innovation, in 2015 the producer added a single variety Arbequina to their line - equally exquisite and a brilliant yet contrasted companion to the Picual. To reach new customers, they recently developed ways to consume extra virgin olive oils in unique and surprising forms like pearls and marmalades. Remarkably they have been able to temper such enthusiasm for innovative products with their incredibly consistent oils. But perhaps it should not surprise that a company consistently producing incredibly well-balanced oils can balance innovation with consistency. This dedication to consistency and balance makes Oro Bailén stand out. While other oils have minor fluctuations in fruitiness, bitterness and pungency from year to year, Oro Bailén finds a way to please those who want perfect to stay perfect, so that each taste creates a delightful moment.

This business adventure turns into a philosophy of life... to enjoy, unite and savor a true fruit juice such as 100% natural, extra virgin olive oil. 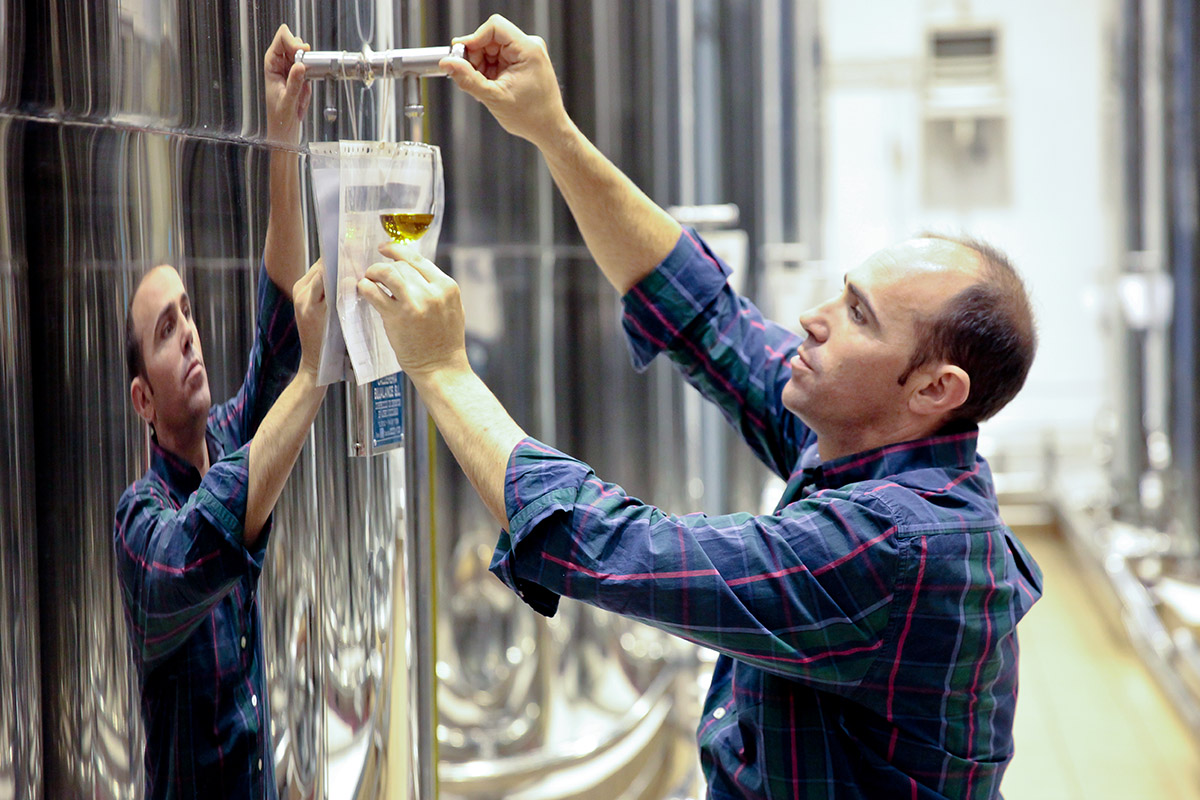 Coming from a family of brick makers and with a business degree in tow - José Gálvez quite literally knew how to build success. Now known as one of the most meticulous producers in the industry, José only began learning about the nuances of olive oil in the early 2000s. The more he consumed the more it seemed to consume him, so much that he chased a Masters Degree in Oliviculture and Elaiotechnics and an expert course in tasting from the University of Jaén, which he completed by 2006. While most olive oil producers in Andalusia focus on the quantity of oil, José’s dedication to quality means tasting dozens of samples each day during harvest, identifying the most subtle of differences between each sample, and then sorting each batch into the tank that needs it the most.

Oro Bailén's remarkable consistency in quality and taste characteristics are due largely in part to José’s palate and quality control, which drives the entire company forward: "The most fulfilling part of this work is to see and to feel the evolution of the product. How we take care of even the smallest details about the fruit, the harvest, and every process to obtain our final EVOO. And after, to check that the consumers enjoy and value increasingly our products and our effort." 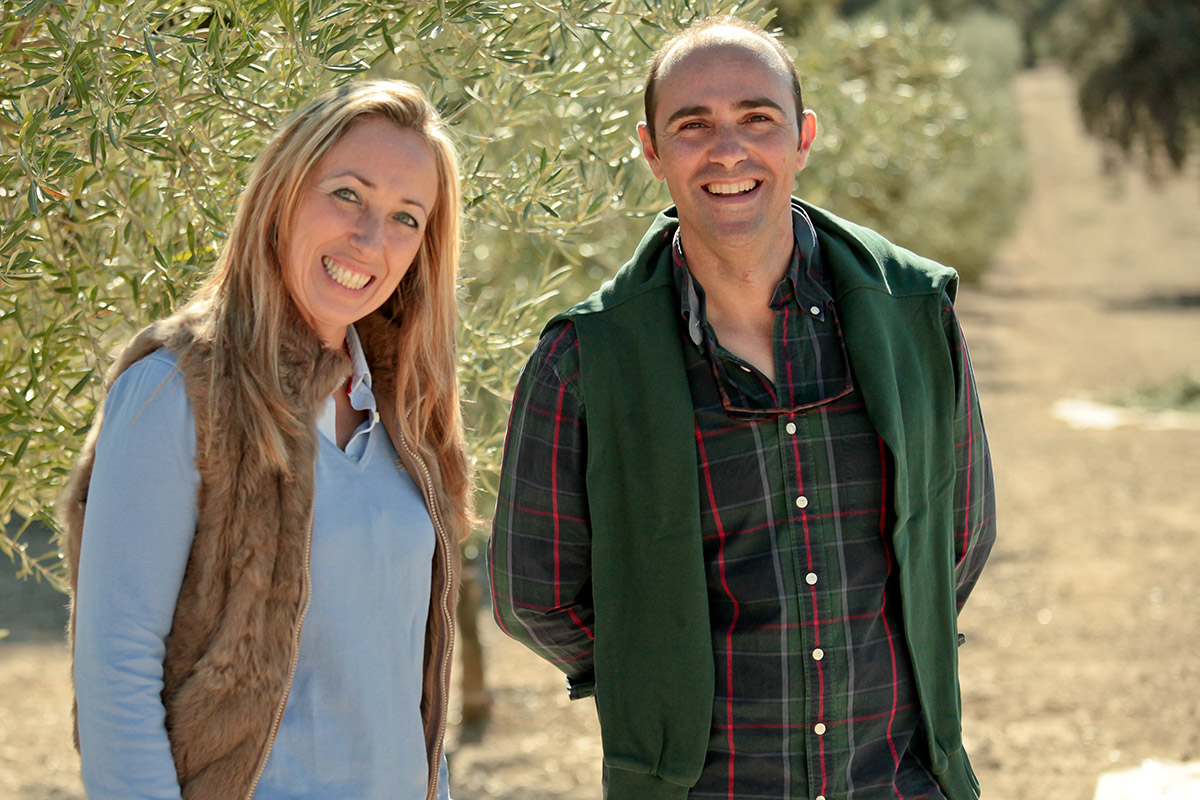 The province of Jaén, Spain, produces more olive oil than any other province in the world. In the town of Villanueva de la Reina, the gateway to Andalusia in the province of Jaén, resides the groves that produce Oro Bailén: "La Casa del Agua" and "Los Juncales," the former a country farm adjacent to the oil grinding mill on the A4 highway, and the latter a mountain farm in the Sierra Morena. Located just south of the largest areas of Mediterranean forest in Spain, these lands have a wide variety of fauna and flora that gives the land high ecological value. The groves sit at the natural border between the Castilian Plateau and the Valley of the Guadalquivir. The valley provides an opening to the ocean, allowing cloud masses to enter and, aided by the dominant winds, cross the corridor from West to East. This effect also produces important rainfall during the spring and autumn. This exceptional location has the optimum climate for obtaining oils with a special aromatic quality, with average annual temperatures between 16-18° C, with an average rainfall of 550-700 mm/per year.

GALGÓN 99 works with an internal department of biologists and agricultural engineers who handle the entire process of managing the farms, including plague control, watering and fertilization plans, observing the olives' maturity rate, and ensuring that objective decisions can be made by management. The groves' farmers use the latest technologies and automatisms to perform irrigation by sectors, land observations and testing, as well as fertilization deployed through the irrigation system (ferti-irrigation). This technique allows the fertilizer to dissolve with the water so the plants' anabolic process occurs more efficiently. 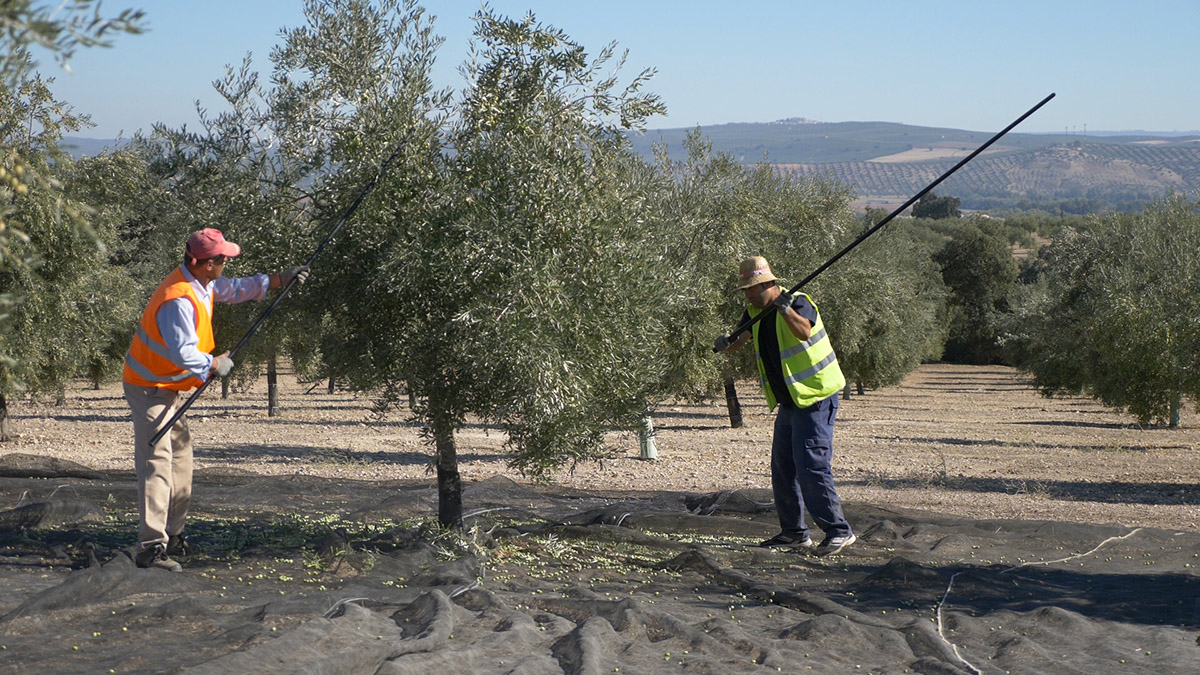 The olive harvest begins in mid-October with picking teams comprised of approximately 60 local workers. The oldest olive variety in the groves is Picual, with trees as old as 100 years. Although it adapts badly to prolonged droughts and excessively chalky, calcareous grounds, Picual grows vigorously in the region, with its short branches quite resistant to frost. The ease of cultivation and high quality oil makes Picual a valuable contributor to Oro Bailén's business. Harvesting of Picual olives typically takes place in the morning, as the pickers using mechanical combs require daylight to work. The other principal variety on the estate, Arbequina, has become the base of most modern plantations around the world because its low vigor allows for high-density planting. Unlike Picual, the super-intensive Arbequina groves can be picked 100% mechanically. GALGÓN 99 deploys their straddle harvesters at night so the olives collected can cool off in the absence of sunshine. Arbequina olives provide a steadiness to the production, as they have high resistance to cold and adapt well to the calcareous soil. Recently Oro Bailén added Hojiblanca olives and the Italian olive variety, Frantoio, to their production. The oils from these olives made their debut in the 2018-19 season. 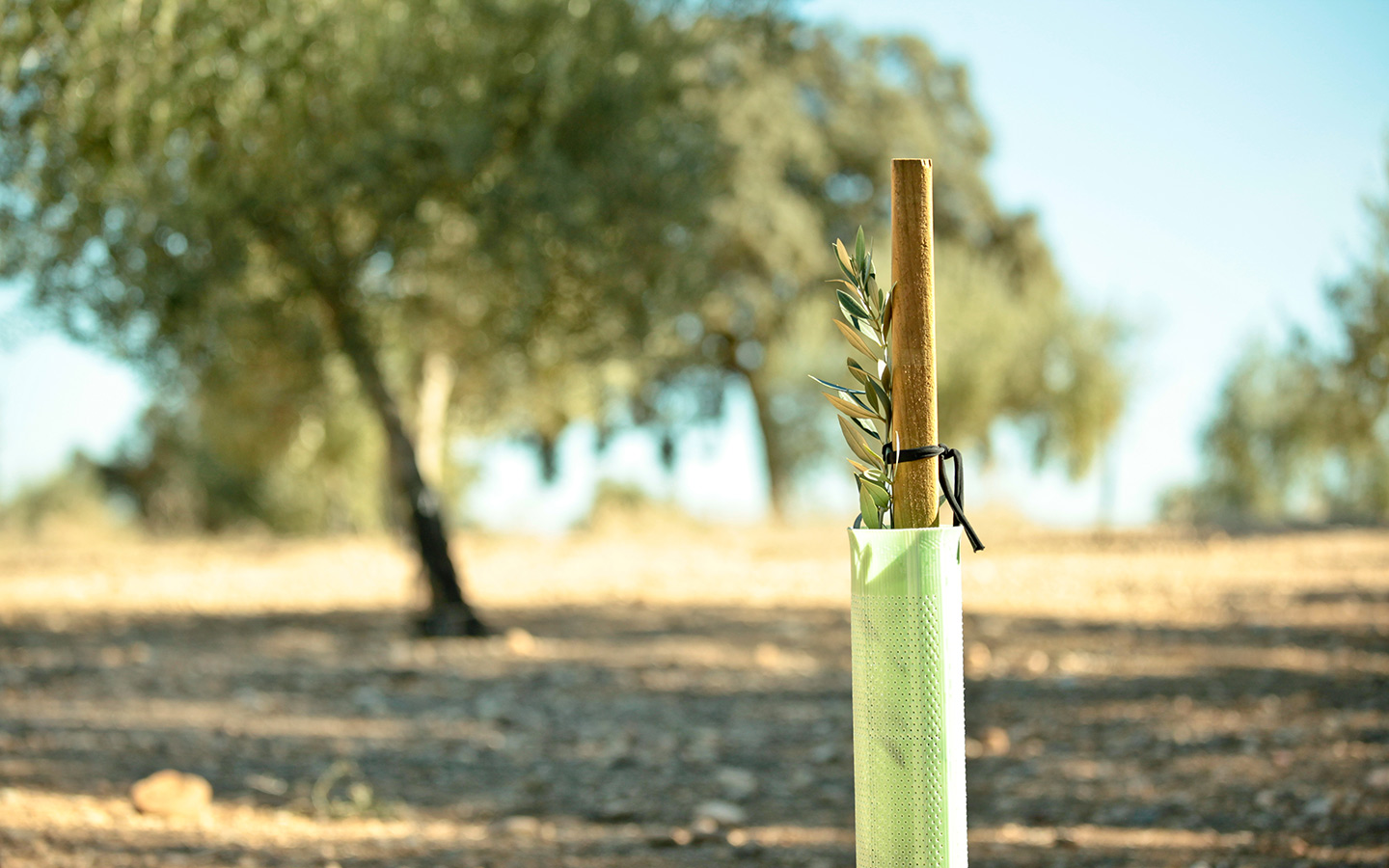 The makers of Oro Bailén consider respect for the environment among the most important principles of their business. Although not yet practicing full ecological farming, their integrated production involves the use of pruning waste as organic fertilizer, turning waste pomace into biofuel, and transporting the alperujo (the mix of olive water and organic fibers) for chemical processing where it can become a fuel source, animal food, pharmaceutical, or other product. At any given time, approximately 50% of the soil in the groves will have a vegetation ground cover which helps reduce both soil erosion and the irrational use of herbicides. This natural practice improves the micro-habitat of the native fauna, which in turn benefits the ecology of their region. Furthermore, all the extra virgin olive oils obtained and released under the brand name 'Oro Bailén' derive exclusively from the olive groves of GALGÓN 99, completing guaranteeing not only the safety of the food, but also its traceability.

In the foothills of Sierra Morena in the province of Jaén, you can visit one of the best oil mills in all of Spain, as well as the olive groves from which Oro Bailén is created. Visits include an introduction to the world of olive oil and a guided tour of the mill where the extra virgin olive oil production process is explained; from the fruit reception, cleaning, beating and extraction, to the storage and bottling. Guests can also enjoy a guided Oro Bailén olive oil tasting session that includes each of their different varieties. Learn the basic principles of sensory analysis, including olfactory, gustatory, and retronasal. Book tours with the Oleotourism department by phone or email. Tours may be conducted in several different languages and last approximately 90 minutes.