The story of Sucesores de Hermanos López began in 1845 with a small family grove of olive trees on a plot of land about 2 acres in size. Six generations later the successors of the original López family now manage approximately 100,000 olive trees across nearly 3,000 acres of land. Though this transformation did not come easily, the ability to adapt to changing times has been a signature of the Andalusian people throughout their history. To achieve success in the competitive world of olive oil required the López family to work hard in the field and maintain dedication to the land, its history, and the final product.

Sucesores de Hermanos López base their operations in the town of Luque, in the province of Córdoba, Spain. Considered one of the oldest towns in the region, Luque sits in the heart of Andalusia, almost equidistant from the major towns of Córdoba, Granada, Seville, Jaén and Málaga. The area has been a cradle for civilizations new and old, evidenced by the town of Luque's preservation of megalithic structures dating back over 4,000 years. Signs of olive cultivation here date to Roman times; workers in the groves today still unearth Roman coins when turning the soil. The Route of the Caliphate also runs through Luque, a long and winding reminder of the region's Moorish history. From its seat on the hill overlooking the town, the Castillo de Luque, known locally as "El Venceaire," reflects the twists of this complex history: built by Nasrid Moors in the 10th century atop the remains of a Roman fortification, most of the castle seen today actually dates to the 13th century after Fernando III reclaimed the land from Arab rule. The unique geography of the Subbetica of Córdoba has made the area of cultural, natural, and historic interest for centuries, so it is no coincidence that this ancient castle maintains watch over the natural gate to the Subbetic Sierras.

The local monuments coupled with the natural landscape provide ample appeal for visitors to the area. Outdoor enthusiasts flock here to visit the Parque Natural de las Sierras Subbéticas for its forests and nature trails. With its narrow winding streets and pueblos blancos, the village of Luque itself serves as a fine example of the picturesque 'white villages' found throughout Andalusia. Besides high quality olive oil, Luque also produces fine artisanal goat cheese. Every two years the town hosts an olive oil fair to celebrate both the area's products and the local millers, artisans, chefs, and cosmeticians. The 120 mile Via Verde also runs through the town, a popular route for bikers and hikers to enjoy the rugged landscape. This trail offers another clue to region's history, as it was built on old train route used in the 19th century to transport olive oil for both export and national consumption.

The birth of the López family business coincided with this peak era of industrialization. The two generations that followed were primarily farmers who worked the fields, however they established practices that would lead to the building of the family's first mill in 1918. A century later, this building still houses the family business. Situated near the center of the small town of Luque, the mill produces the family's oil only from locally harvested olives. The beautiful local olives here reflect the terroir of this very rural area with its unblemished soil and exceptionally clean air. Over the last decades the old olive mill has been fully modernized, demonstrating the company's commitment to minimizing environmental impact while producing the highest quality products. "Our biggest inspiration is the olive tree: It has been around for thousands of years and continues to be productive."

The producers at Sucesores de Hermanos López state that one of their biggest challenges in the olive oil business is, "helping the consumer understand the difference of quality and the subtleties between different oils." To this end, while they do not have a curated agrotourism program, they still encourage those visiting the area to make at a stop at their mill. The town of Luque operates its own Centro de Interpretation Aceite de Luque, an information center that details how the best olive oil is made. The information center is located by the Via Verde station and welcomes guests from 9 am until 9 pm.

The López family also owns and operates a set of rural apartments called Los Castillarejos, perfect for those who want to enjoy the area, its oil and local foods, and the natural setting of the Subbetica Mountains. This large private estate set on over 30 acres was built on the grounds of an old Andalusian farmhouse using local materials, such as limestone and Subbetic stone, and designed with a firm commitment to both modernity and functionality. Los Castillarejos takes its name from an ancient fortified Iberian structure, the archaeological remains of which rest just a few meters from the resort. 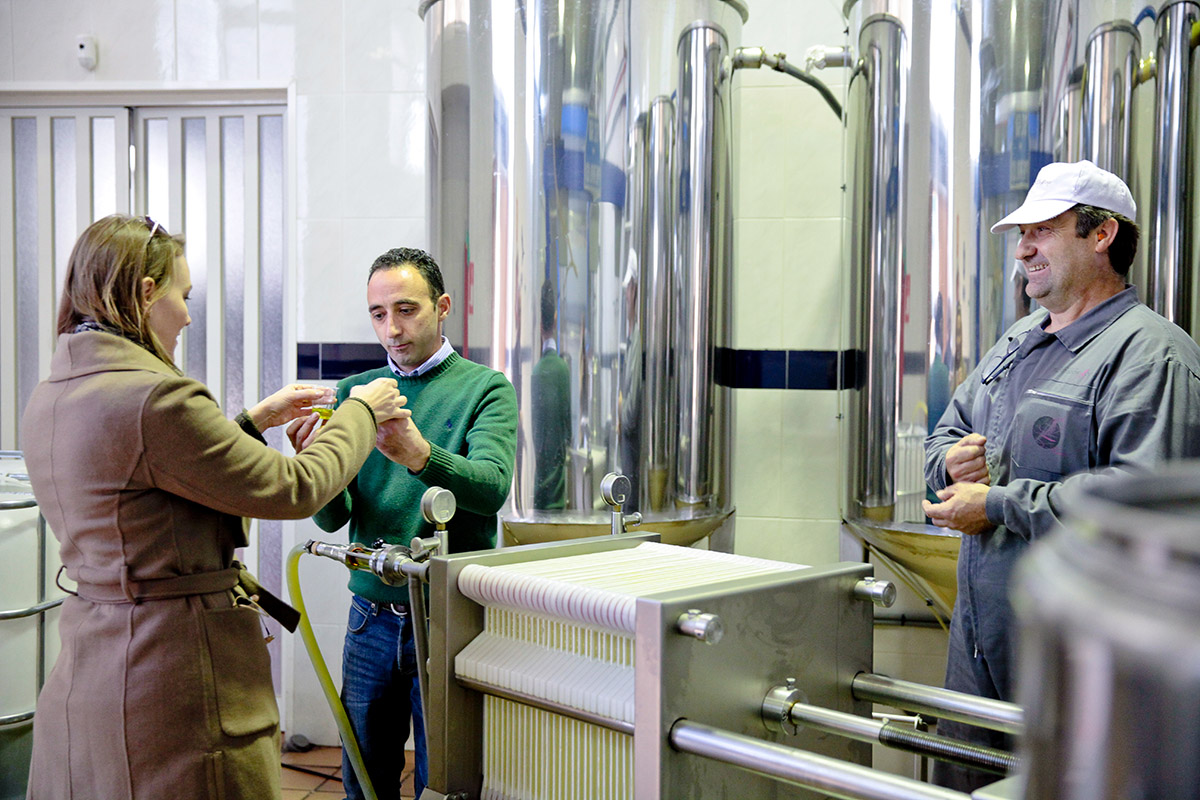 Today the López family counts over 167 years of continuous dedication to their olive groves. From their start in 1845 on barely 2 acres of land, the family worked the land and slowly expanded their holdings. They took their first major step forward in 1918 when Antonio López Ortiz de la Torre built the family mill. With its hydraulic presses and truncated conical wheels, the mill's equipment represented the best technology of the day. Antonio worked together with his brother, Vicente López Jiménez, to create a base for the family-run business. The business established by the two brothers reached maturity 60 years later when their successors established Sucesores de Hermanos López SA. By the time of its founding in 1979, the company had over 1500 acres of olive trees under its care. As they began to bottle their own brand, a big push for quality soon followed. Around this time the Protected Designation of Origin of Baena was also established. The family saw this European effort as an important opportunity to unite with other local growers, to promote the heritage of their product, and to demonstrate the excellence of their olive oils. 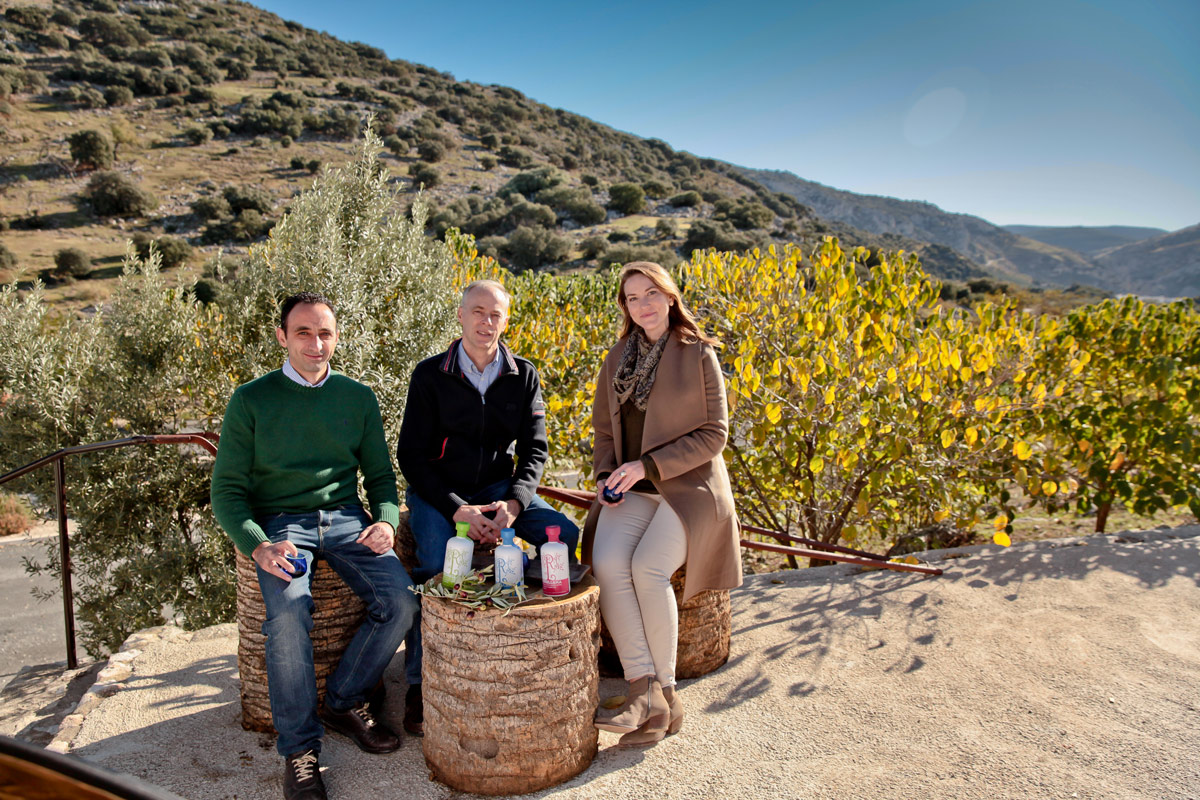 Having to meet the strict standards of the PDO led to another step forward in the family business. As better equipment became available they implemented more technological improvements, including major updates to the old oil mill. They also committed to improve their marketing, with efforts focused on their premium oils branded under the names Morellana and La Laguna. The current generations continue to take on the challenge of modernizing the company, with Andrea López managing administrative duties and agronomist Antonio López overseeing the trees and their fruit. Quality of the olive oils rests in the capable hands of Alberto del Moral López, the Head Miller of Sucesores de Hermanos López, who maintains meticulous control over all variables involved in the production. Together they help to build upon the long family tradition of producing the highest quality olive oils on the market today. The groves of Sucesores de Hermanos López benefit from the chalky alkaline soil of the region. The producers attribute the high polyphenols found in their olive oils to this well-draining soil and the area's low annual rainfall. While the rugged slopes of the Sierras Subbética help make the oils distinct, these conditions do make collection more difficult and costly. While the company plans to increase organic production in the coming years, with many of the groves having already transitioned, the favorable conditions of the region's microclimate help produce beautiful olives with minimal pest issues. Individual farms receive much pampering, with company agronomists relying not only on the family's knowledge, but also that of local growers and the PDO to obtain the best from the olive trees. The farmers also devote themselves to the region's natural parklands, with their organic methods promoting biodiversity while also protecting the habitats of native species. 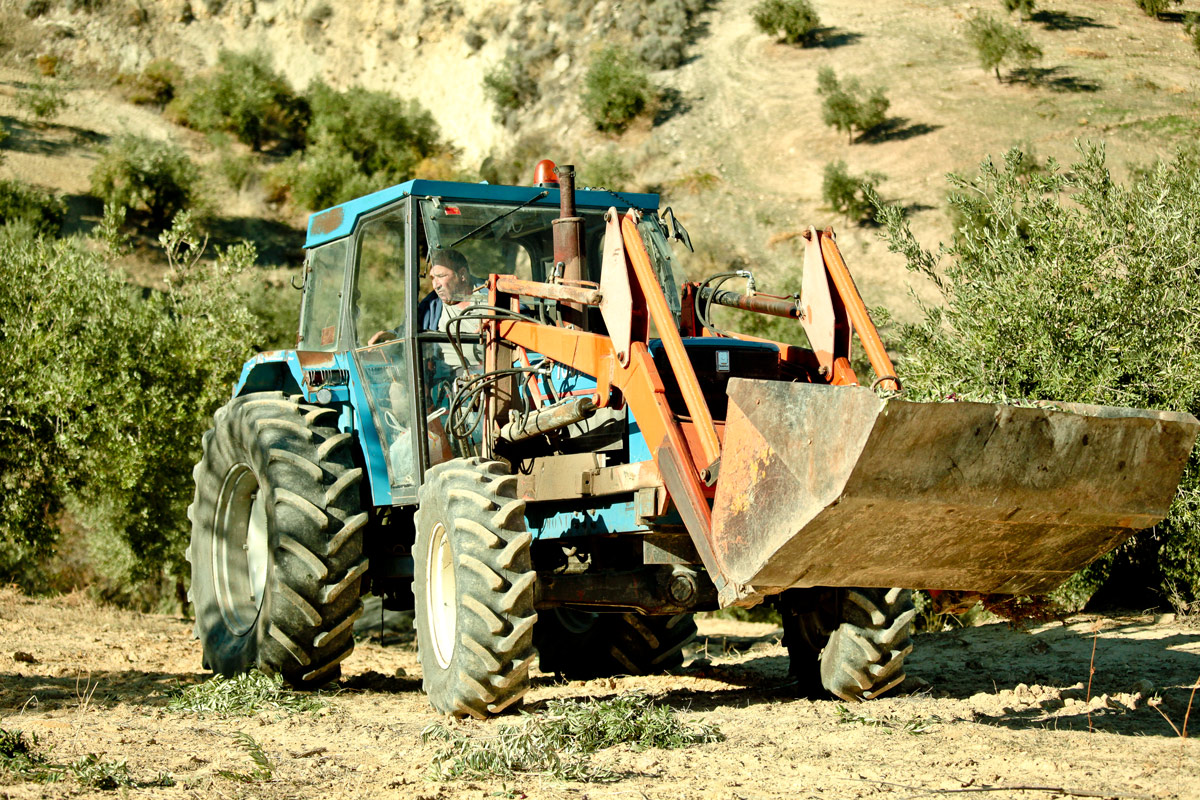 Many of the trees harvested here pre-date the company's founders, with some specimens over 200 years old. Like most olive oil producers in Andalusia, Sucesores de Hermanos López primarily grows the typical Picual and Hojiblanca varieties most common to Jaén and Córdoba. However, a third variety makes up 30% of their production, the Picudo olive, which is native to the Baena PDO and produces one of the most exquisite oils in the world. In recent years they have increased their planting density, replacing grain fields for olive groves mostly of the Picual variety. While many local producers have opted to replace the Picudo variety with more productive olive trees, Sucesores de Hermanos López maintain the native Picudo for its heritage and historical value, in addition to its exceptional tasting profile. 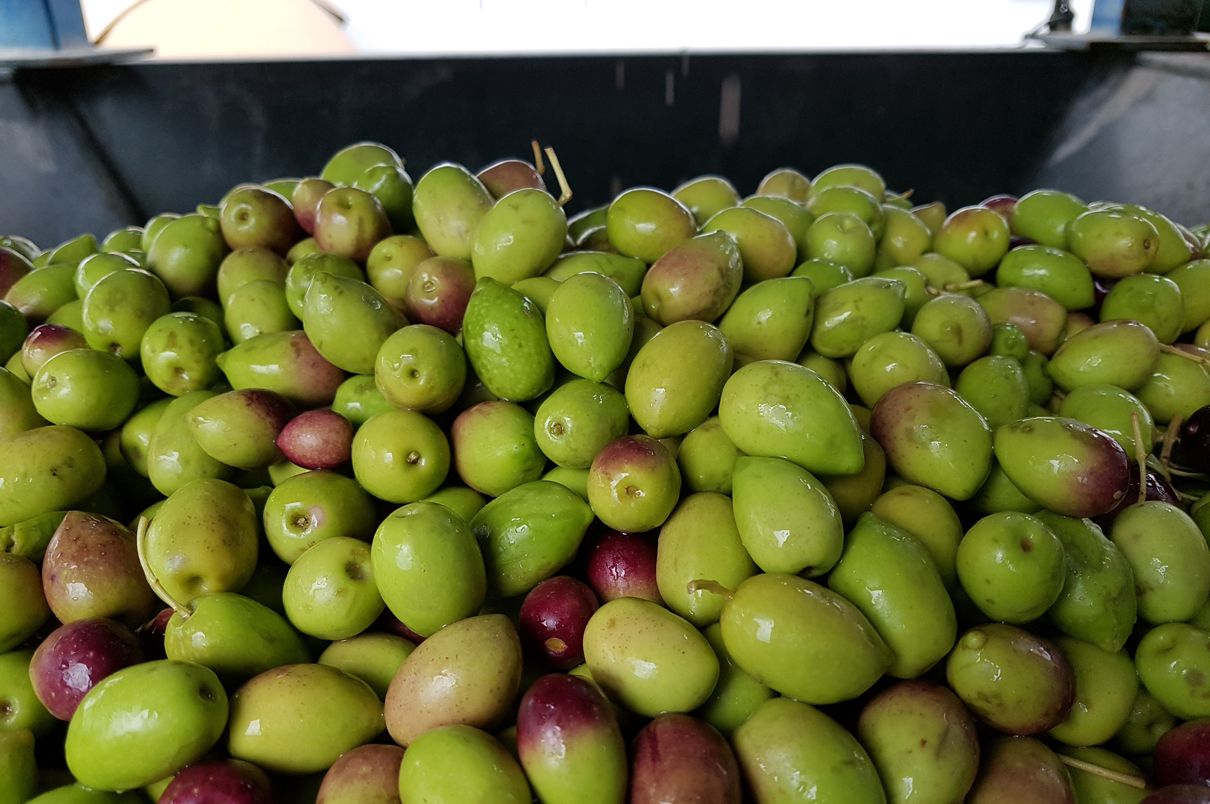 Although the exact date varies from year to year, harvest typically begins mid-October when the olives still remain mostly green. The juice from these early-harvest green olives will become both Morellana and Laguna Select olive oils. The producers claim that none of their olive varieties pose a challenge to pick, only that the timing of the harvest can increase the difficulty in collection, therefore they only use knowledgeable workers: local Luqueños or those that have been trained over the years. The picking methods vary according to the landscape, the variety of the olive, and the fruits' ripeness. Workers perform hand-harvesting in areas tractors cannot reach, with tractor-mounted shakers and hand-held combs used in easier terrain. The producers note that harvesting methods can affect the prices of their products, in particular hand-picking, due to the lengthy time and number of pickers needed to reach the fruit. However, seeing customers' faces light up when they finally try the olive oil is the reward in the end that makes it all worthwhile for Sucesores de Hermanos López. 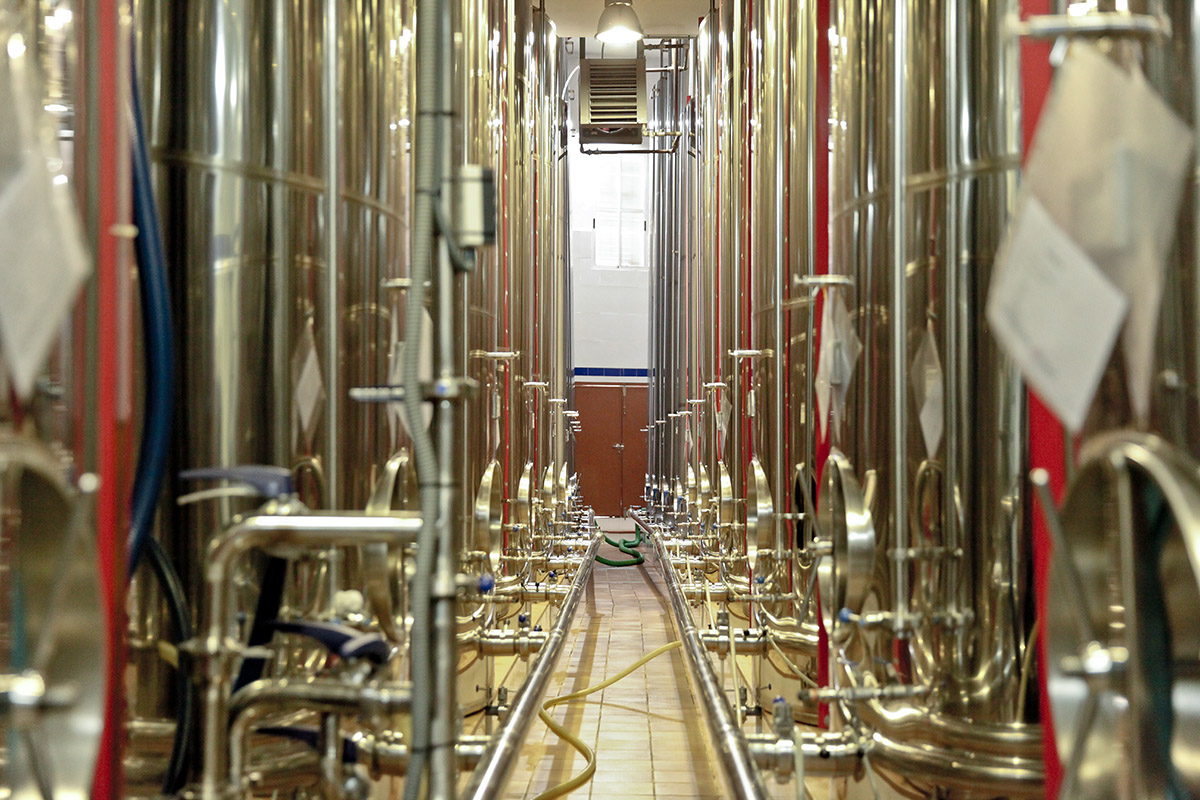 To maintain pristine conditions while elevating the pungency of the olives, Sucesores de Hermanos López use hammer mills to extract the fruit juice. For separation of the oil, they recently upgraded to an advanced dual phase centrifuge. The region had many issues in the past with producers using the triple phase centrifuge, as many farmers dumped the wastewater into waterways. The dual phase centrifuge eliminates waste water, and instead concentrates the bi-products so they can be more easily treated in pomace processing facilities. This practice helps illustrate how Sucesores de Hermanos López strives to use all parts of the olive. After separation, the olive pits get turned into a biomass fuel used to heat the mill’s offices and rural apartments, while the processed pomace can create a low-grade cooking oil.

A sample from each lot of olive oil produced will immediately undergo chemical analysis to determine its fat content and acidity. The lots then get placed in individual tanks labeled with cards detailing the results of the analysis, grove location, and any other relevant information pertaining to the batch. In recent years the mill began using nitrogen gas in the storage tanks to further preserve the quality of the oils. With the olive fruit having a very short time at the optimal stage of ripeness for producing high quality oils, Sucesores de Hermanos López produce very limited amounts of their premium line of olive oils branded under the name Morellana. They acknowledge that they could obtain more oil from these olives, but doing so would sacrifice both the quality of the oils and the unique identity of the Morellana brand. Yet this obsession with quality, spearheaded by Alberto del Moral López, has led to much international recognition in an incredibly competitive sector.

"TRY IT... Be adventurous; try it on different dishes to see how they change. Just a small change of EVOO on your morning toast will open your mind to new possibilities." 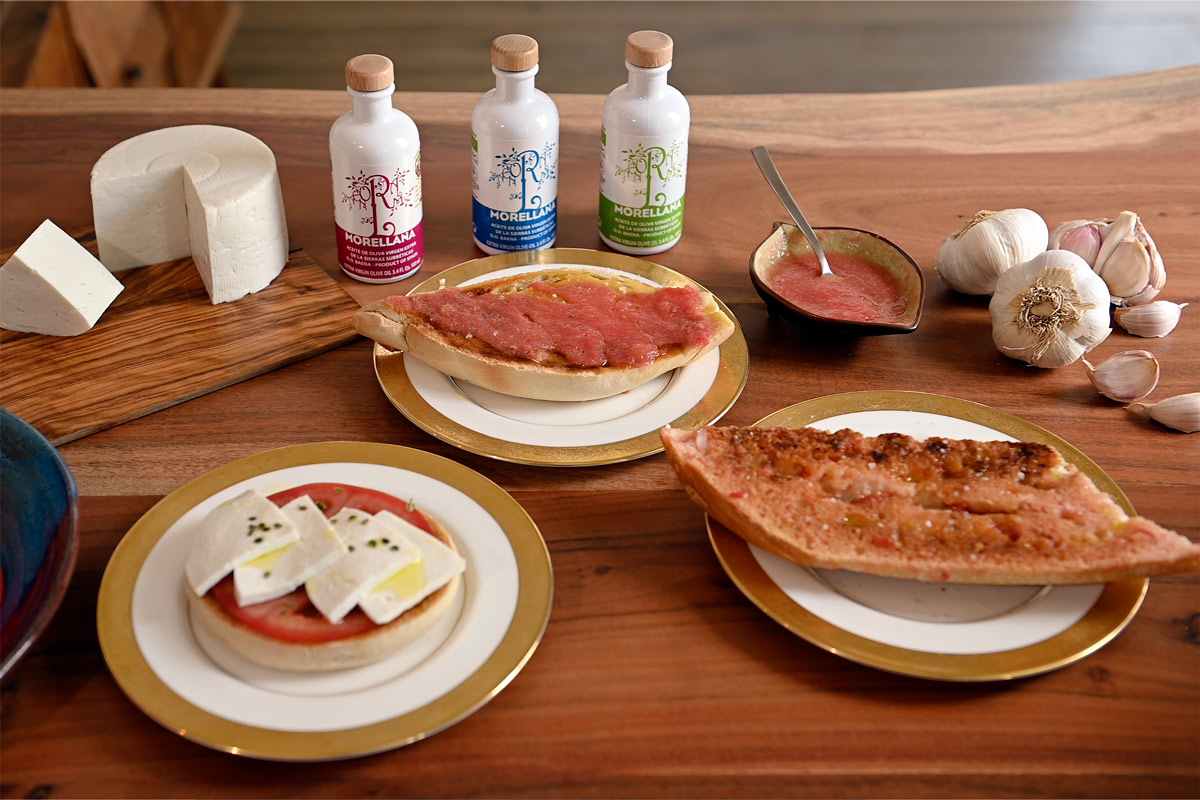 "TRY IT... Be adventurous; try it on different dishes to see how they change. Just a small change of EVOO on your morning toast will open your mind to new possibilities."