The olive groves located in the Seville and Córdoba provinces of Andalucia, Spain, date back more than 2 millennia to the times of the Phoenicians. Evan as the lands changed hands over the centuries, from the Romans, to the Moors, and back now to the modern-day Spaniards, the economy remained largely based on olives. Of course throughout the history of the region the growers themselves did not always receive the full benefit of their labors. To unite the efforts of the regional producers and thus improve the society in which they all lived, in 1986 Alvaro Olavarria Govantes founded Oleoestepa. This cooperative of regional growers came together with the belief that achieving the highest quality extra virgin olive oil possible would provide tangible benefits to every one of their communities.

It is most fulfilling to give back to the community, continuing the tradition that has been passed down for more than 2000 years.

The Oleoestepa cooperative spans across the regions of Estepa, Sierra Sur (Seville), and Puente Genil (Cordoba). In addition to olive oil, the area is known across Spain for its Christmas candy industry. One of the sweets made in the region is the Polvorón, a rich shortbread often made with almonds. Polvorónes are a type of Mantecado, a more generalized term that encompasses all the icing-covered baked goods that fall under the PGI "Mantecados de Estepa" appellation. This regionally certified protection requires at least one phase of production to occur in Estepa.

Many of the olive oils made by Oleoestepa also receive a regional certification, specifically, the Protected Designation of Origin - Estepa. PDO certifications require all phases of production to occur in the specified region. This type of rigorous testing ensures the quality of the product, which in turn helps elevate the quality of the entire region's oils. Olive Oil certification in the Estepa region is among the world's most demanding, as it requires a higher score for fruitiness than any other PDO in the world, as well as a high polyphenol count to help stabilize the oils against oxidation. These strict standards help preserve the oil quality over a longer period and give PDO Estepa oils longer shelf life. While Spain is known for producing more olive oil than any other country in the world, the commitment to quality in this particular region is notable, as over 87% of the oil produced by Oleoestepa is extra virgin. As a result, the oils of Oleoestepa have received over 100 awards since the coop's inception. The group's signature oil, Estepa Virgen, has been a regular finalist at the prestigious and standard-setting International Olive Council Mario Solinas awards, taking home first prize in 2013.

Yet without the coop, the region's individual farmers would struggle to achieve such high standards and extreme quality. Through the combined efforts and coordination of the coop, the strict PDO certification is made possible for thousands of farmers each year. By supporting these farmers, the coop has been able to help lift the economy of the entire region. Because of the olive industry's value to the community, the leaders of the coop also incorporated social responsibility mandates into their mission: to exceed the expectations of their customers; to exceed the standards of all health and safety regulations; to promote innovation and improve product quality; to adopt business practices that promote environmental conservation; and finally to be loyal to and respect their customers, the environment, and their community. On average the region’s economy lags behind several other areas in Spain, but the cooperative model has proven that this type of agricultural business can help a community’s economy in myriad different ways. The olive sector in the region generates 225 million euros annually on average, and helps create hundreds of thousands of jobs beyond simply farming, including work at mills, labs, conservation groups, bottling plants, restaurants, and beyond. Although the region has below average economic development in Spain, the cooperative model has shown how a business can help the community beyond just economics.

A special blend of organic Hojiblanco and Picual olives with a green grass aroma and pleasant notes of green leaf. Flavors of artichoke and green wood delight the palate while a robust balance of bitterness and pepper tickle the tongue.

Estepa Virgen is pressed from fresh, unripe olives picked at the beginning of the harvest, it is intensely fruity with moderate intensities of bitterness and spice. A delightfully complex oil for the discerning palette.

Seleccion is a clever combination of two high-quality Spanish variety olives, Arbequina and Hojiblanca, resulting in an extraordinary oil. It is well-balanced in fruity intensities as well as its bitter and spicy qualities in the mouth.

This high-quality extra virgin olive oil is fruity in taste and well-balanced with both spicy and bitter intensities. Pressed from 100% Arbequina olives, its prominent fruitiness is most characterized by green fruits, tomatoes, and a hint of green almond.

Hojiblanca is one of the main variety of olives grown in the Estepa region of Southern Spain. It has a medium robust intensity, which is typical of the variety, and an aroma reminiscent of fresh cut grass and apples.

A harmonious blend of organic Hojiblanca and Arbequina olives, this organic extra virgin olive oil has aromas of green olives, artichoke, freshly cut grass, olive leaf and green almond. On the tongue it's well-balanced with a light spicy finish.

This extra virgin olive oil is made from predominantly hojiblanca olives, harvested very early while the olives are still green, and cold extracted. On the nose there is a smell of freshly cut grass and green fruits. The palate is dominated by green nuances, and provides a pleasant burn and bitterness that are very well balanced.

Made from predominantly Arbequina olives, harvested early and cold extracted, this extra virgin olive oil is very smooth and delicate with an aroma of freshly cut grass. On the palate, apple and almond are noted with an elegant balance of bitterness and spiciness.


VIEW PRODUCT
The People Behind Oleoestepa
The People
The Farmers

With their farmers now numbering over 6,600, the members of the Oleoestepa cooperative are the starting point for everything the company does, and they help drive the economy of the region forward. The coop is able to consolidate resources to invest in research and development projects that benefits all the producers in ways not possible for a small farm working individually. The coop helps farmers overcome technical challenges and implement new technologies to improve efficiency and increase the value of their work. The group uses shared laboratories to help ensure quality, working with dozens of accredited testers to achieve organoleptic perfection across all their products. Their researchers not only identify the technical specifications of each oil, but also perform tests across the region's groves to determine ideal harvest dates and extraction methods. Oleoestepa is arguably the most rigidly tested, sustainably sourced, regionally certified, large-scale producer in Europe and the world. Furthermore, their commitment to sustainable development in their economic activity was highlighted this year when the General Assembly of Spain’s Agri-Food Cooperatives named Oleoestepa cooperative of the year for 2020. In acknowledging this distinction, Jesús Pedro Juárez Martín, chairman of Oleoestepa SCA, recognized “the quiet yet key work of the 6,500+ partner families dedicated in times of recession to this cooperative project."

The quality product is a result of healthy trees, ideal climate, nurtured soil, and the combined experience of the associated producers.

Find Us
Production
The Land & Trees

The farmers of the coop control land across Seville, with their groves influenced by the Sierra del Becerrero, a protected region that also contains the highest point in Estepa. As they work with many growers, height above sea level varies from 200-800 meters. In this prime agricultural region of Andalucía the hills are made of permeable stone that filters the water nourishing the groves and also imbues it with important minerals. The rich quality of the soil in the region is ideal for Hojiblanca variety olives, which make up over 75% of Oleoestepa's production. The youngest trees in the coop are the Arbequina variety, responsible for about 15% of production. The rest of the production comes from Lechin, Manzanillo and Picual trees. Many groves managed by the coop include trees planted 500-800 years ago, with a few trees of the Lechin de Seville variety estimated to have lived 2000 years. Together the coop manages groves covering over 54,000 hectares (over 133,000 acres) and containing over 7 million olive trees.

For the farmers of Oleoestepa, harvest begins in late October when the olives are mostly green and just starting to turn purple. They prefer harvesting with a 3-person team on each tree: one operating a tractor-mounted shaker and two working the pneumatic hand combs. It's a very economical practice for the coop, and it's also incredibly fast. With this method the team can finish harvesting a tree in 30 seconds, allowing the olives to be transported to the mill as soon as possible, usually within two hours. It's also a clean operation where the olives never touch the ground.

Oleoestepa performs their cold extraction process on whole, clean, fresh olives in order to attain the highest quality extra virgin olive oil. To crush the olives they use metal toothed grinders, a clean and modern process that delivers great results. They tell us that high quality products are a result of mindful practices, so perhaps the key to the success of this coop model is Oleoestepa's commitment to the practice of Organic Integrated Farming, an EU agriculture standard aimed at delivering sustainable farming. This practice encompasses all facets of farming and production with the goal of using data to achieve continuous improvement. While their systems must be profitable, the sustainability goals require respect not only to economic development, but also to community development and environmental protections. By combining modern tools and technology with traditional practices, they can care for the land and the olives in the way that best suits a particular region or site.

One example is their harvest methods, specifically a refusal to use straddle harvesters. These machines can be fast and efficient, however they can only be used in high density groves which need to be completely replanted every 15-20 years, not ideal for the biodiversity of the groves. Whenever possible, they have implemented renewable energy, and in general use as few pollutants as possible to help improve soil fertility. The sustainable and rational use of natural resources, especially water, also helps protect soil from erosion and ensures long-term viability of the land. To help preserve olive quality, Oleoestepa deploys dedicated agronomists to advise farmers about harvest timing, soil quality, and the necessity of using pesticides or herbicides. These scientists can help identify pests and potentially diseased trees, an added layer of protection to preserve quality of the olives, the land, and ultimately the community. By providing such a consciously-produced oil made with sustainable methods, Oleoestepa offers the consumer peace of mind and an easy decision when shopping for quality olive oils.

The quality product is a result of healthy trees, ideal climate, nurtured soil, and the combined experience of the associated producers. 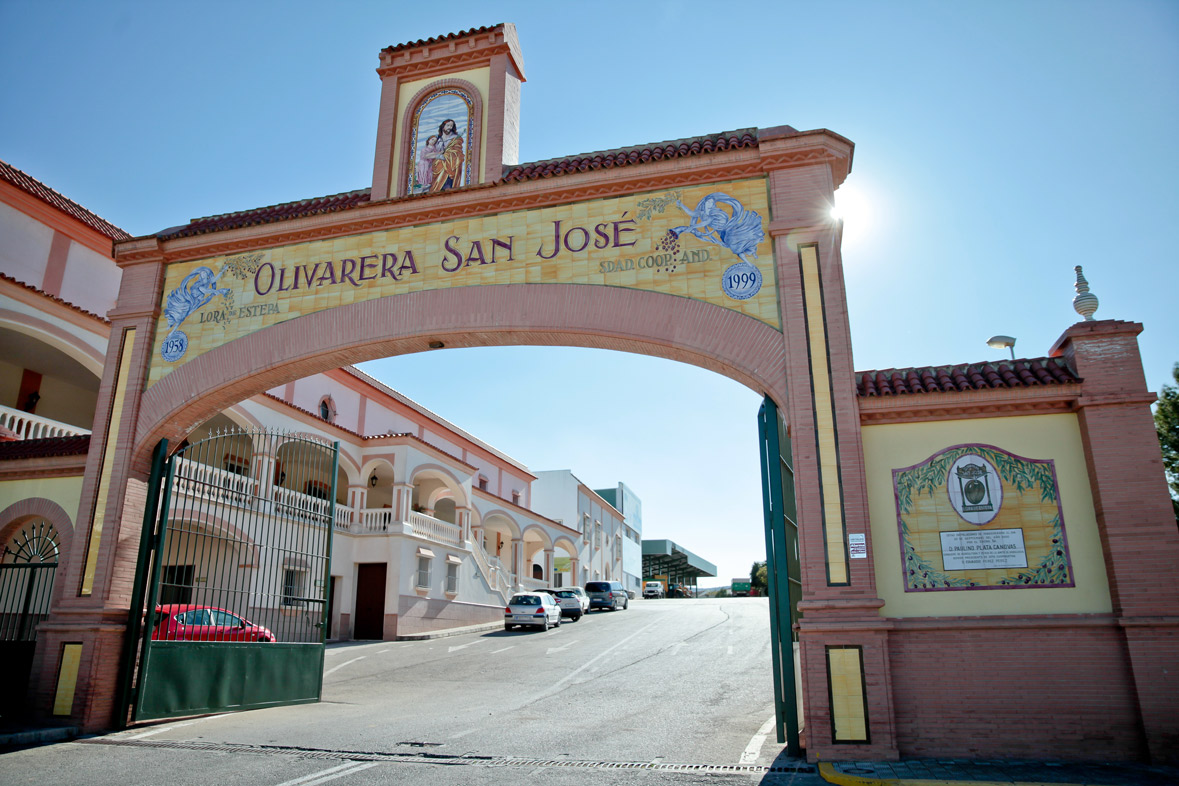 Why Olive Oil Lovers?
8 Simple Reasons Why You Should Choose OOL
Learn why we are the best at what we do and what makes us a brand consumers trust.
Learn More
×